I recently attended the St. Johns County Cattleman's Association's 55th Annual Cracker Day.  Memories came alive, since it had been 30+ years since my last visit.  There were many flashbacks to the sights, sounds and aromas that filled the cool morning air.

Cracker Day is so named for the historic cowboys of Florida that used whips to round up cattle in the dense underbrush and swamps.  (At least that's one interpretation.)  Throughout the day you could hear the "miniature sonic booms" as young men practiced their skills at "Cracking the Whip".  They even contested their ability to pop balloons at some distance.   I assume because their were no cows around. 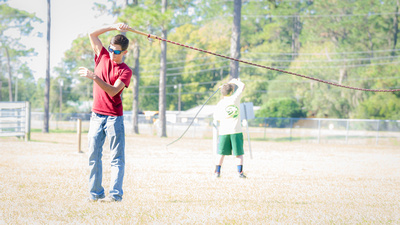 I'll have to admit I was a bit apprehensive, even intimidated, by the thought of photographing an unfamiliar subject.  Most of you know, I know boats and the such, however, horses not so much.  I have only ridden a couple of times and never even tried to photograph a horse before.  But I'm always up for a challenge.

My first though upon arriving was, "Wow, there are a lot of trucks and trailers here."  But I guess you just can't fit a horse in the back seat of a hybrid.  Oh well, there goes the "antique, ranch-style" backgrounds I was hoping for.  Trailers were of every shape, size and color, however, they all had one thing in common.  There were no covered wagons here.  MTV "Cribs" would have been proud of these mobile equine condos.  They also doubled as the buffet table as feed bags hung ready to serve. 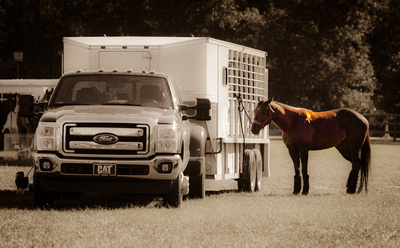 Most of the riders were young ladies warming up their horses in and around their portable stables, some out on the dirt track.  A few were grooming and others for a more mod touch were painting horse tails.  A couple of tack trailers were set-up to provide for those last minute needs.  Used saddles, readied for use captured my eye.

The horse arena was an open air covered structure.  The dirt was freshly tilled and ready for running.  Poles were in place, timer set.  Before I realized it came a rider out of nowhere racing to the other end of the course.  A hard hairpin turn and a curvy restart weaving back through the poles. Twice around and a sprint to the finish.  I bet the parent holding the lead line was quite tired after guiding the pony and child rider through the obstacles at a blistering 50 sec pace while running in boots.  That's dedication, dad! 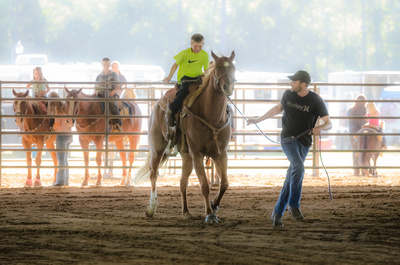 First were the poles, then the barrels followed by an exciting game of "Pick-UP" where a rider grabs a parter from the ground while in full stride, swings them up onto the horse and races to the finish line.  One word, Insane!  From children to adults they all gave their competitive best.  Seeing the excitement in their eyes made the shot.  They looked happy to be right where they were, even if it wasn't first place. 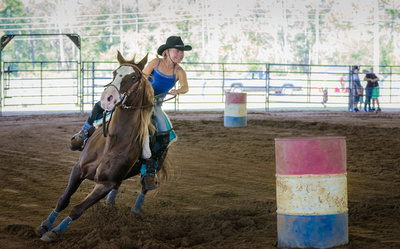 I'm sorry I couldn't stay for the whole day, but was thrilled to have experienced another great time with the St. Augustine Camera Club and a few new friends and their horses.  The country music, BBQ and funnel cakes made it perfect.

The lighting scenario for photography was less than desirable, but I managed to get a few good shots.  Handling the background highlights against the shadows of the subjects while trying to capture something moving at 20 mph was tricky.  I resorted to flash on a few shots but was more concerned that it would upset the horses.  I really relied on the higher ISO capabilities of my Nikon cropped dslr coupled to a fast glass 70-200 2.8. 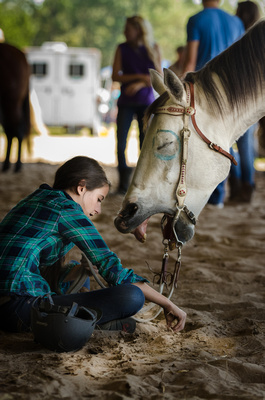 1.  Watch the ground in front of you while you walk, stop, then look for the shot.  Always in that order.

2.  The art comes from anticipating a horses moves.  With practice will come improvement.

3.  Five hours at this years Cracker Day will never make me a rodeo aficionado, but it was lots of fun and an event worth preserving for the youth of our generation.

Looking forward to next year,

Stephanie Parrish Pelt(non-registered)
Byron, Thank you for sharing this event. I cannot believe you've never been to Cracker Day! As someone who grew up attending annually, you tend to forget that there are actually folks who have never been. My daddy used to cook the BBQ for the event. I think it may have been a SAHS fundraiser. He would go out on Thursday evening after work to get everything set up. They stayed up ALL night on Friday cooking in the pit so it would be the very best it could be come Saturday morning! I well remember going out on Friday evening and hanging out with my dad and the other men who were cooking. The wives would take them dinner and the kids ran around like crazies playing chase and tag in the dark. Always, my 4-H club had a fun booth to sell things for the day. I remember selling sno-cones, cotton candy and having a "go fish" game. I am glad you were able to participate in a long tradition in St. Johns County. Thank you for the great pictures and the blog. It took me back and I enjoyed remembering the good times there!
No comments posted.
Loading...
Subscribe
RSS
Keywords
photography mountains black augustine infrared cars race swamp and white
© Byron Capo Photography
Powered by ZENFOLIO User Agreement
Cancel
Continue