The Race (Another Lap)

MORE THAN A RACE

Well, I went and did it again!  Another lap at the Rolex 24.  Most of you will immediately realize that it has since passed by several months.  No excuses for the delay other than the weekend sending me into thee weeks of pneumonia and an empty bank account.  Thus the need to work my butt off to catch up.

This year I went to the race with a different mind set.  Instead of taking the same old pics of cars going around the track, I really wanted to focus on capturing the feeling of the participants, the spectators and the overall atmosphere.

It helped a lot that we stayed in a camper instead of a tent and our site was center ring for the entire circus. For four days our typical routine was to get up, eat breakfast (or drink a beer), grab a seat, wave to the Continental Tire girls across the way and watch the scene unfold.  Then it was off to watch some racing (with beers in hand),  back to the camper to grill some dogs, more beer and prep for the evening race.

SpectatorsThis shot took 10 tries before I was able to capture a 120 mph car in the center frame. 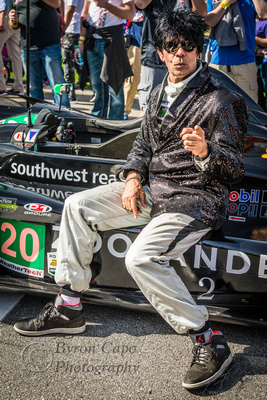 Although I haven't been to many races, as you can imagine, it brings together a variety of personalities and socio-economic statuses.  This race, in particular, has such a range of attendees, it, at times, appeared like a modern day "Beverly Hill Billies."  It wasn't uncommon to have three guys sharing a two man tent and a single lawn chair, right next to a 5 million dollar motor home with their Porsche and/or Farreri parked out front.  Personally, I thought it was absolutely fantastic.  But the best part of it all was that everyone was there for one purpose.  The Race.  Everyone got along and had a great time together.

Camping in Comfort!Some might think its hilarious that these guys have a big screen TV within their campsite broadcasting the race while it happens right in front of them only a few feet away. Typical Racing!

Before the start of the main race, officials, open the track (along the pits and just beneath the start/finish line), to spectators.  There was a parade of the top cars and all the drivers and their cars were there to converse, sign autographs and just hang-out.  This was so cool.  We were even allowed to walk up on the track and sign our names on the checkered start/finish line.  Even the drivers were getting into it.  (Reminder to self.  Never forget a Sharpie, cause a pencil just doesn't work on asphalt.) 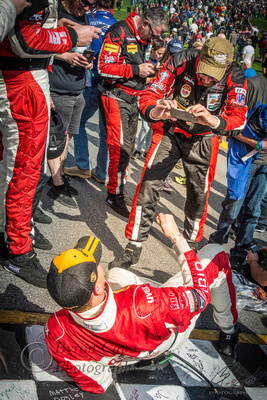 As the race wore on, particularly in the early morning hours, you could see the stress and fatigue was gaining on drivers and crew.  One of my shots in particular was of a young driver that had just been relieved around 8 am.  Dirty and sweaty with race gear still on, he was "back-pit" hanging out with friends.  He looked up just as I was shooting and managed to give me a smile, but you could see the tired in his eyes.  The pressure to perform must be monumental.  (I have since learned that most of the drivers have to pay, NOT get paid, to get into these driving positions.  Must be love!)

PressureResults from the monumental toll a race can inflict on a young driver trying to make their way in this sport.

Not much change in this department. The cars are just as sexy and exciting as ever.  Oh, and did I mention FAST!  Holy Cow, either they are getting faster or I'm getting slower.  And it doesn't matter if they are 100+ mph on the asphalt or three feet off the ground in the garage, you just want to climb in one and experience the rocket ship. 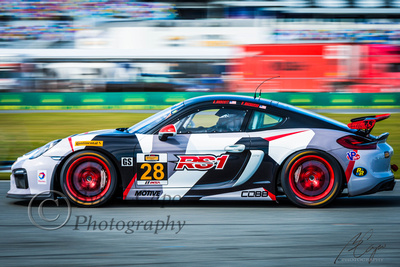 Even though I was trying my hand at photojournalism, I frequently would take a break to shoot the race.  Practicing my "panning".  I still have a long way to go, but happy with some of the results.  This year I took a ladder, it helped.  But I still would have rather been on the other side of the fence.  I did have an opportunity to strike up a conversation or two with several of the pro's on the other side.  Shoot a thousand pics a day, cull through them, pic out the best, submit and restart. Rain or shine, night or day.  Interesting job!